#science
FEFU Scientists have Broadened the Understanding of the Reaction Sintering of Transparent Ceramics
The porous structure (mesostructure) of the compact has a tremendous impact on the functional characteristics of optical ceramics obtained by the method of reaction sintering. The parameters of this structure are proposed to be set by preliminary annealing of compacts at temperatures below the beginning of the reaction interaction and consolidation. This was reported by a research group from the Far Eastern Federal University (FEFU), the Institute of Chemistry of the Far Eastern Branch of the Russian Academy of Sciences (FEB RAS), the Institute of Single Crystals and also the Institute of Physics of the National Academy of Sciences of Ukraine, and the National Institute of Laser, Plasma and Radiation Physics of Romania in an article published in an authoritative edition of the Journal of the European Ceramic Society.

The homogeneity of the mesostructure of compacts - nanopowders pressed into tablets, from which ceramics are obtained, is one of the most important characteristics during sintering. For ceramic materials of optical (laser) quality, it is necessary to achieve the removal of hundredths and thousandths of a percentile of residual porosity at the final stage of sintering in order to ensure a low degree of light scattering.

“Managing the homogeneity of the original compacts can be achieved by varying many technological parameters, for example, by changing the technology of compaction, the choice, and modes of preparation of the original nanopowders. However, a feature of the technology of ceramics reaction sintering is that the energy transferred by the multicomponent powder system, from which ceramics are obtained, is spent on competing processes of phase transformations and consolidation. For this reason, we proposed to control the initial state of compacts by annealing, prior to their sintering,” says Denis Kosyanov, head of the FEFU research team, a senior researcher at the FEFU National Technology Initiative (NTI) Centre.

The scientist noted that the achieved values of the differential efficiency of lasing on samples of ceramics obtained under optimized conditions for annealing compacts (600 ° C / 4 hours) are at the level of world analogs (65-67%).

Scientists have previously already described the proposed approach in the journal “Ceramics International” on the example of the reaction vacuum sintering of Y3Al5O12: Nd3+ + laser ceramics.

The work published in the Journal of the European Ceramic Society is devoted to a more detailed establishment of the connection between the homogeneity of the original compacts, their structural-phase state and the functional parameters of the final material.

FEFU has a priority project "Materials" and the National Technology Initiative (NTI) Centre on the specialty of virtual and augmented reality (Grant No. 1/1251/2018 from October 16, 2018), in which, among other things, they are actively engaged in the development of the scientific and technical basis for the creation of multifunctional ceramic materials for microelectronics, lighting engineering and radiochemistry.

The studies were carried out within the framework of grants of the Russian Science Foundation (Project No. 18-73-00145) and the Russian Foundation for Basic Research (18-29-11044). 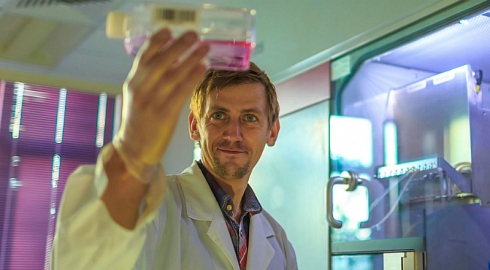