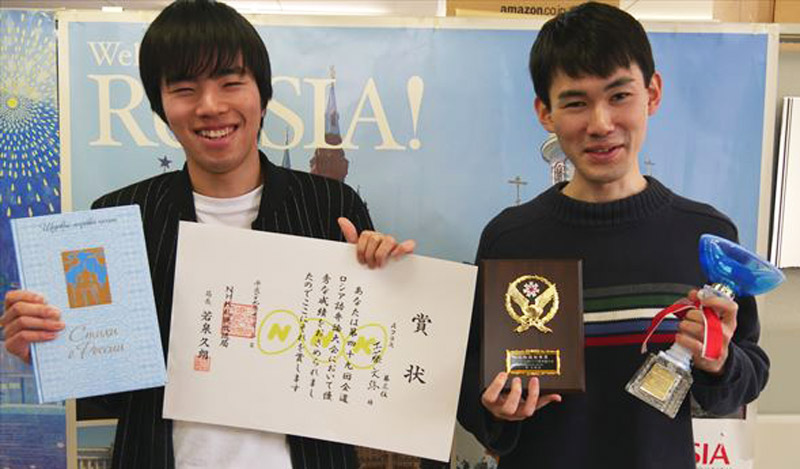 Students of the Far Eastern Federal University (FEFU) branch in Hakodate (Japan) won prizes in the 49th Hokkaido Russian Language Contest. The four-year student Tomoaki Kaneko was awarded for the absolute victory on behalf of the governor of Hokkaido Prefecture. The second-year student Fumiya Kudo took the third place and received the prize of the NHK Sapporo Office.

According to the FEFU branch representatives, this is the second contest in the Russian language for Tomoaki Kaneko, and this time the student was awarded for his The First World War in Postcards presentation. Fumiya Kudo participated for the first time and devoted his presentation to the stars of Russian figure skating. In total, 38 students from various prefectural universities participated in the competition, which was organized by the Hokkaido branch of the Japan–Eurasia Society.

“Thank you for the opportunity to participate in the competition and to communicate with students from other universities, which was a great incentive for me,” said Fumiya Kudo.

The FEFU branch in Hakodate is the first and only official branch of the Russian university in Japan, which has worked on Hokkaido Island since 1994 and makes a significant contribution to strengthening ties between the countries. Today, 70 students are studying the Russian Language and Russian Regional Studies there. Over the years, the branch has trained more than 1,000 Japanese students.

The FEFU branch is not only the center of training and professional development of specialists, but also serves as a powerful educational center for promoting Russian culture. It regularly hosts events that familiarize students, residents of Hakodate and other cities in Hokkaido Island about Russia.