Russia's first pilot eco-house made of straw panels with a passive solar heating, designed by the Professor of the FEFU Department of Architecture and Urban Planning Pavel Kazantsev, was awarded the Silver Diploma of the Golden Chapiter 2016 National Competition. The large-scale show of architectural works took place in Novosibirsk with the participation of 111 Russian and international authors and creative teams.

Solar houses have a southern facing orientation (to ensure maximum intake of the solar energy) and use buffer zones (a greenhouse can be located at the South and a garage at the North of the house), which allows cutting heating costs by 30-50%. Passive solar heating system of the building has a custom-made window (double or triple glazing PVC with two or three heat-reflecting film layers) and a solar heat collector composed of bricks, concrete and water containers. By giving away the solar heat absorbed during the day this system would protect the house at the period of the night cooling. During the heating season passive solar heating of the Solar series eco house can satisfy from 37% (air temperature: -24oC) to 90% (air temperature: -15oC) of the heating needs of the building. 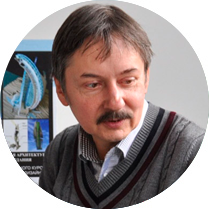 Pavel Kazantsev, architect — "The classical scheme of passive solar heating was implemented in the architectural part of the design.  The central double-height atrium is oriented to the south and thus collects and distributes solar heat into the living rooms. Service buffer spaces are placed in the north, behind the blind—devoid of openings—facade. Summer aeration is solved by atrium dormer windows and end stained glass panels. This allows to improve significantly the temperature and humidity in the house and does not require complex engineering and construction methods".

This project became a recipient of an international ENERGY GLOBE WORLD AWARD 2010/11.

Pavel Kazantsev pointed out that the passive solar heating of the eco-house is optional and provides up to 50% of the required heat.  Therefore, the project also incorporates water heating solar collectors and hot water supply, and for maintaining their autonomy it was proposed to use solar cells. Experts consider as the innovative solution of the house the configuration of the roof, customized for optimal placement of solar energy installations.

The construction of the first eco-house of ​​187.8 sqm under the project by FEFU professor was completed in 2015 in Novy settlement, Primorsky Krai.  With the permission of the contractor, the field trips of the architecture students have been regularly conducted at the site, they studied in detail the green construction technologies there. Currently the interior decoration is being done, but a group of researchers of the Far Eastern Federal University and the Far Eastern Branch of the Russian Academy of Sciences continues to explore the features and functionality of the new type of building.

Pavel Kazantsev is a recognized expert in the field of green architecture and is actively developing this area in FEFU within the framework of the FEFU Competitiveness Enhancement Program under the 5top100Project. The key result of the national project should be the appearance in Russia in 2020 of the modern leading universities with an effective management structure and international academic reputation, able to set trends in the global higher education development.